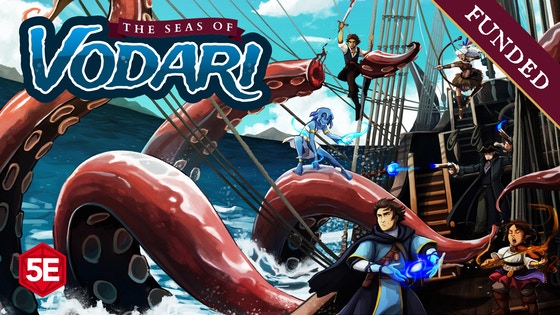 Here is a quick update about the backer surveys which we estimated would go out today (May 1, 2019).

1) The money from Kickstarter is in the bank, so we are all clear and ready to send out backer surveys.

2) We're currently waiting on final approval of our surveys from Backerkit before we can send them out. We expect approval by tomorrow or Friday at the latest. We'll start by sending out a test to 5% of you and then everyone else will receive their survey shortly after.

Kickstarter has charged everyone's credit card and we're just waiting for the money to arrive in our bank account. We're still on track to send out the backer surveys on May 1, 2019.

Our team is hard at work on the Quickstart Guide. We're still on track for everyone to receive a copy by May 21, 2019.

Things are moving around a bit, but we're planning to provide this content in the guide:

The guide is looking like it will be a little longer than the 50+ pages promised and will contain lots of support for players in seafaring campaigns and a starter adventure. Much of the gamemaster content won't be available until the final book, but we're providing limited samples of everything for the guide. Our early-access backers will see content before everyone else.

The guide is likely to get updates, so we'll recommend that everyone avoid printing it. The guide will have limited formatting versus the final book, so it will be print friendly for those who want to print.

Thank you backers, we reached 525% of our funding goal. This is incredible and we couldn't have done it without your support.

Our Kickstarter is over, but we will still be sending regular updates on progress and when anything is being made available to backers.

1) Backer Surveys - Right now we're just waiting for everything to clear over the next couple of weeks between Kickstarter, Backerkit and the bank. We'll be sending the backer survey sometime around May 1, 2019. If you were notified by Kickstarter about an issue processing your payment today, please try to fix any issues ASAP to avoid having your pledge dropped from the Kickstarter and losing out on your reward.

2) Quickstart Guide - We're working hard on the Quickstart Guide which you'll be getting in May. Our goal is for everyone to have it around May 21, 2019. The guide is likely to get updates, so we'll recommend that everyone avoid printing it. Since the quickstart will have less formatting and polish than the final book, it will be it will be print friendly for those who want to print.

3) Preorders - We have set-up Backerkit with a pre-order storefront. You might notice the prices are just a little higher than the prices of the rewards and add-ons during the Kickstarter. No worries, any backers who want to bump up their pledge level or grab add-ons will still be able to get the same price as the Kickstarter when the surveys are sent out.

Well it happened. What recently was that far off 50k stretch goal has been smashed through! Thank you everyone for this incredible final push.

We're looking to provide a PDF with the following content:

Rich Howard (I believe he is a secret amphibious human) will be leading the charge on this PDF. Rich has worked on and released a ton of undersea content for RPGs. We couldn't have offered the Under the Seas of Vodari  PDF without having Rich's knowledge and creativity onboard.

While we're out of stretch goals, the more this Kickstarter funds in the last 2 hours, the more amazing artwork, maps, and other content we can get into the book. Thanks again to all of our backers for the incredible support you have shown by backing this and by telling your friends, family, gamemasters, players, and social media about the KS.

What an amazing day of support! Thank you to all of our new and existing backers.

Now that the 40K stretch goal is unlocked, we'll be adding two more subclasses to the book.

Over the past week many of you shared your ideas for subclass concepts you'd like to see in the book. There were some great ideas and we're working to get some of them in the book as subclasses or in other ways such as with a feat or equipment.

Here's a rough sketch for two of the first twelve subclasses. Any idea what class/subclass combo these could be?